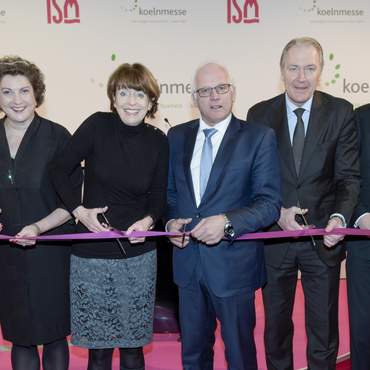 The Association of the German Confectionery Industry e.V. (BDSI) can look back on a positive development for the industry and its pleasure-bringing products both in terms of sales and turnover in the year 2016. The association announced this in the run-up to ISM, the world's largest and most important trade fair for sweets and snacks, in Cologne. Hereby the production volume was slightly up on the previous year level (+0.5%), the turnover increased by 3.5%. However, tough market pressure on the national market, insecurities on the international competition front, ever-increasing state regulation and ongoing high costs for raw materials are taking their toll on the profits of many of the over 200 industrial manufacturers of German sweets and snacks. The price for cocoa butter was especially high in the year 2016. Furthermore, in the second half of 2016 the prices for butter, whole milk powder and sugar rose considerably. The price for cocoa beans was also much higher than the previous year level. The ongoing high demand, above all in Asia, was one of the reasons for this development.

Reinforce the competitiveness of our companies through good political framework conditions

The sweets industries is a significant and stable employer in all regions of Germany and makes an important contribution towards affluence and employment. However, the industry is faced with economic challenges. In spite of the overall good economic situation, the profit situation in the firms has been tense for years. The BDSI is thus in favour of checking all political areas and legislation with regards to their effects on the competitiveness of the companies. Hereby, the focus should be placed on increased planning security and a reduction of the red tape. "These demands for good framework conditions for the domestic economy should not just be implemented in Germany, but indeed on a European level. Uniform EU regulations are imperative in order to reinforce the competitiveness of the companies," said Bastian Fassin, Board member of the BDSI and Chairman of the International Sweets & Biscuits Fair Task Force (AISM).

In this way, for instance the framework conditions for export must be improved by making export procedures simpler and in particular by making it easier for sweets to access the market by formulating trading and preferential agreements with practical rules of origin. Unfortunately, at the moment, the approaches of the German and European politics are moving in the opposite direction. Highest priority is given to protecting agricultural raw materials. The promotion of the exports of highly processed products such as sweets with high added value and the securing of many jobs in Germany and Europe is attributed less importance. The CETA agreement with Canada ultimately proved this, which in addition to the desirable customs facilitations will also bring with it a considerable additional administrative and financial effort for the exporting sweets manufacturers.

Economic development of the sweets industry in 2016

According to BDSI estimates, the over 200 industrial manufacturers of German sweets and snacks were able to slightly increase their production volume in 2016 by 0.5% up to around 4.0 million tonnes. In terms of value, the production rose by approx. 3.5% up to around 12.28 billion Euros. The BDSI estimates are based on the official figures from the German Federal Statistical Office.

In terms of volume, the domestic offer* (= production + import - export) increased by around 1.2% up to just under 2.7 million tonnes in 2016, whereas the domestic sales volume for the same period increased by an estimated 1.7% up to around Euro 8.05 billion.
(* The domestic supply is calculated without semi-finished products and raw ingredients.)

Produced in Germany - popular all over the world

The export business for sweets and snacks showed positive development in 2016, both in terms of volume and turnover. Overall, an estimated 2.05 million tonnes of sweets and snacks were exported. This represents a volume increase of 2.6% in comparison to the previous year. The export turnover rose by 6.2% in 2016, amounting to approximately Euro 7.99 billion.

The German sweets industry has been the export world champion for over 40 years in succession. With an export share volume of around 50% (previous year: 49%), almost every second tonne of German sweets is destined for export. Around 80% of all sweets exports go to European Union member states.

The increasing insecurity in the export business that is so important for the industry is a cause of concern for the manufacturers. The business with Great Britain is overshadowed by great uncertainties due to the Brexit. Around 5% of the sweets produced in Germany, which accounts for an export turnover of approx. € 770 million, was exported to the United Kingdom in 2016. In the USA, which is the third most important market for the German sweets industry, a tendency for protectionism towards domestic companies has become noticeable. Furthermore, the industry is expecting the challenges for the exporting companies to increase further in 2017 due to the red tape and strong currency fluctuations.

In 2016, the average consumption per capita of sweets, snacks and branded ice-cream amounted to an estimated 32.71 kg or the equivalent of 97.90 Euros. Thus, in terms of volume it remained pretty stable in the ten-year comparison (2006: 31.96 kg). According to the statistics, every German person consumes 670 kg of food (excl. drinks) every year. The share of sweets amounts to less than 5%.

Employment figures: In 2016, the German sweets industry remained stable employing around 50,000 employees, which makes it the fourth largest sector in the food industry.

Outlook for the fiscal year 2017: Sweets industry is confident

The year 2017 will bring the sweets industry opportunities, but also challenges. The industry is assessing the employment situation and the overall good consumer mood in Germany positively. The biggest challenges for the manufacturers remain to be the volatile situation on the significant raw material markets, the intense retail concentration as well as the increasing bureaucratic demands placed on the companies. The increasing insecurity in the important export business is however also a cause of concern for the manufacturers. Thus, at the beginning of the year the German sweets industry is only showing reserved optimism.

The sweets and snacks produced in Germany are popular worldwide among the young and old, among men and women - providing small moments of joy in everyday life. The German sweets industry is one of the particularly innovative industries and once again this year will present a wide variety of new products at the International Sweets & Biscuits Fair in Cologne.

The rediscovery of so-called classics, i.e. traditional products that have been available for many years or decades, which are frequently made according to original recipes, are among the trends on the sweets market.

We are also noticing demand for contrasting flavours. Combinations of sweet/salty or sweet/sour as well as combinations of different products such as chocolate and biscuit or cream and cake are becoming increasingly popular.

Custom-made products for individual consumer needs remain important on the sweets market. These include sugar-free/sugar-reduced or fat-reduced or Halal sweets, as well as products that are suitable for a vegetarian or vegan diet. As such, the consumers already enjoy a very broad offer of a wide range of products so that they can put together their diets according to their individual desires and needs. In spite of all efforts to develop new recipes, the decision still ultimately lies with the consumers, because they only buy what they like eating.

A majority of sweets and snacks are available in different portion sizes. Above-all small packages, individually packed products for on-the-go enjoyment, but also resealable packaging are further trends for 2017. Personalised products are becoming increasingly popular among the consumers.

The use of sustainably produced ingredients in sweets and snacks is being intensively promoted by the industry and will remain a priority in the future too.

According to the estimates of the BDSI, the production volume of chocolate items showed an upward trend in the year 2016. In total approx. 1.1 million tonnes of chocolate products were produced in Germany. This corresponds to a volume increase of 1.6 % in comparison to the previous year. In terms of value, production rose by around 3.8% up to a total of Euro 5.42 billion.

The per capita consumption of chocolate products in 2016 was estimated to be 9.74 kg.

The manufacturers of fine pastry products rose slightly in 2016. The production of biscuits increased in volume by 0.9% based on estimates by the BDSI. In total, 721,000 tonnes of biscuits were produced.

In terms of value, the production experienced a growth of 1.0% up to approx. Euro 2.06 billion. The seasonal business with autumn and Christmas biscuits was satisfactory overall in spite of the difficult start due to the summerlike temperatures in September 2016.

The development of the exports of biscuits was slightly positive with a growth rate of 1.1% in volume and 2.9% in value.

The per capita consumption of biscuits in 2016 was estimated to be 7.32 kg.

The development was positive for the manufacturers of sweets and confectionery in 2016. The production volume rose in comparison to 2015 by an estimated 2.9 % up to 584,000 tonnes. In terms of value, the production of sugar confectionary rose by 3.2 % to around Euro 1.57 billion.

The development of the exports of sweets and confectionery was positive in 2016 with a growth rate of 1.9% in volume and 5.5% in value.

The per capita consumption of sugar confectionery remained stable in 2016 at around 5.78 kg.

The manufacturers of snack items were able to carry on the positive trend of the previous years. According to the estimates of the BDSI, the production volume rose by 2.0% up to around 301,000 tonnes. In terms of value, the production was able to achieve growth of 2.9% up to around Euro 1.04 million.

The category comprising salty snacks has been considered to be a strong growth segment on the German market for years already. The manufacturers of snacks gained additional impulses in the year 2016 as a result of the major sporting events (the European Football Championships and the Summer Olympics).

The per capita consumption of snack items was estimated to be approx. 4.28 kg in 2016.

Chewing-gum is still extremely popular with the Germans: Achieving a 1.6% increase in the sales volume, the success of the past years was repeated in the year 2016. In particular, sugar-free chewing-gum experienced a positive development with a sales increase of no less than 4.0%. The sales volumes of chewing-gum containing sugar is down by 12.5%. Chewing sugar-free chewing-gum as part of the daily dental care is now also one of the seven basic recommendations of the initial scientific guideline on preventing tooth decay, which was published under the aegis of the German Association for the Restorative Dentistry (DGZ).